Unity through Sharing and Studying the Word 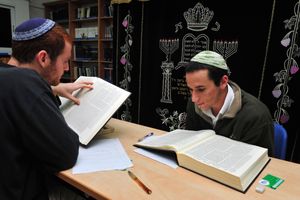 This month I began to think about the topic of unity…not just a “kumbaya,” philosophical concept, but something more concrete and practical…how studying and sharing the Word of God in our communities, affects unity. God’s desire is not for uniformity of thought, but rather a collective, diverse understanding that enables people to see our God and Messiah from all sides.

Traditionally, religious Jews study in a place called a yeshiva which means “to sit,” because you generally sit in a place of learning. A yeshiva does not run lecture style, meaning the rabbi does not preach and the students merely regurgitate what he said for testing purposes. Rather, a student is paired up with a study partner called a chavruta in Hebrew which means “friendship.” This study partner, who is ideally on the same intellectual level, is designed to challenge his friend in his ideas, opinions, and theological understandings of the Word of God. He is there to hold his friend accountable in religious interpretation. This is why Proverbs 27:17 says, “As iron sharpens iron, so a man sharpens the countenance of his friend.” It is not in pleasant, non-confrontational conversation that this sharpening happens; it is when there is FRICTION, through the lens of accountability and brotherly love, that sparks fly and our skills as believers are honed. It is also why Paul says in 1 Peter 3:15-16, “But sanctify the Lord God in your hearts, and always be ready to give a defense to everyone who asks you a reason for the hope that is in you, with meekness and fear; having a good conscience, that when they defame you as evildoers, those who revile your good conduct in Messiah may be ashamed.” The only way we get good at giving a defense is to actually practice defending our faith in a safe environment. This is the Jewish way of yeshiva. Sadly, learning to defend our faith is a lost art in Christian circles, by and large, choosing rather to focus only on the topics that everyone can agree on. It makes believers weak and unprepared for the battlefield.

Though maybe not as organized into clear study partners like the Jews, some of us do have those particular people we run our religious and theological thoughts by from time to time. While others of us, for reasons of shame, embarrassment, fear, shyness, etc. prefer for one reason or another to study alone, and keep their thoughts to themselves. (Aside: I once had a classmate’s father say to me when I was a child that, “Shyness was the devil way of keeping you from being who God has called you to be.” I have never forgotten this truth!) This isolation is viewed as an unhealthy habit in Judaism, and it is strongly discouraged. In the Talmud (Rabbinic commentary on biblical concepts), Rabbi Yosi b. R. Hanina is quoted as saying that “scholars who sit alone to study the Torah…become stupid” (Berakhot 63b).

Why? Because it is a deception to think, even in small part, that anyone could possibly possess all biblical truth alone. God has bestowed upon each of us different personalities, experiences, etc. that have birthed a wide range of personal testimonies. Each of us possesses some biblical truth, and we need each other in order to have a complete and full understanding of the Word of God. Therefore, the Torah’s understanding of unity is one that elevates rather than eradicates differences. This diversity is partly what makes studying together essential for true unity.

It says in Numbers 1:2, “Raise up the head of the whole Israelite community…” A famous Hasidic rabbi of the 1800s interprets this verse saying: “The reason for raising the heads is as we have learned in the Talmud (Berakhot, 58a): ‘This one’s mind is not like that one’s mind.’ God has apportioned each person unique goodness and life, for no two people are the same. Therefore it says, ‘Raise up the head,’ meaning, each one has to be raised up in the appropriate spot, and through this, everyone in the right place will be seen to be special and unique…if one person would take the place of another, then the whole tribe is incomplete.” This sentiment is also present in the New Testament in 1 Corinthians 12:20-26, “But now indeed there are many members, yet one body. And the eye cannot say to the hand, ‘I have no need of you’; nor again the head to the feet, ‘I have no need of you.’ No, much rather, those members of the body which seem to be weaker are necessary. And those members of the body which we think to be less honorable, on these we bestow greater honor; and our unpresentable parts have greater modesty, but our presentable parts have no need. But God composed the body, having given greater honor to that part which lacks it, that there should be no schism in the body, but that the members should have the same care for one another. And if one member suffers, all the members suffer with it; or if one member is honored, all the members rejoice with it.”

So what’s my message on unity…we need to humble ourselves and be willing to share our biblical thoughts and interpretations with one another on a regular basis and to make time to listen to the ideas of others as well. (Remembering: God spoke through a donkey. He can speak through annoying, needy, ignorant, know-it-all people, too.) We must allow for righteous, holy, and fruitful rebuke or confirmation to come forth, and to find joy in raising up each other’s heads and sharpening the countenances of our friends. Failure to do so will make us an incomplete, disconnected, weak, and disjointed Body.

The devil knows this, as well, which is why he is so hell-bent on causing division and DISLIKE amongst the community. (Yes, I said dislike. Sometimes the reason you can’t stand someone is because God wants to use that person to bless you and the devil will point out every flaw about them so you no longer see the good in them, and in so doing, never receive you blessing.) Proverbs 14:1 says, “The wise woman builds her house, but the foolish pulls it down with her hands.” We must be builders of gateways of communication. We must have the Word of God on our tongues and in our hearts. We must make concerted efforts to engage each other in the study of the Bible for edification and reproof that we all feel and know that we have been heard.

Talking about and debating about the Word of God encourages and enforces right thinking and right theology. It also dispels arrogant, deceptive, and false theology. Forcing one another to defend their beliefs, divides the wheat from the chaff, the goats from the sheep, and creates a healthier more unified community because of it. It ultimately brings the dark into the light, where often times the roots of bad teaching can be found, sometimes buried behind manipulation, bitterness, fear, hurt and misperception. Often times these roots don’t come to the surface until pressed. As a community of believers, we are our brother’s keeper, and it is our duty to make sure we are all walking on the straight and narrow. There is much we can learn from one another. I leave you with one final quote from a Jewish book called, Ethics of Our Fathers (Ben Zoma 4:1), which states, “Who is wise, one who learns from every man…”